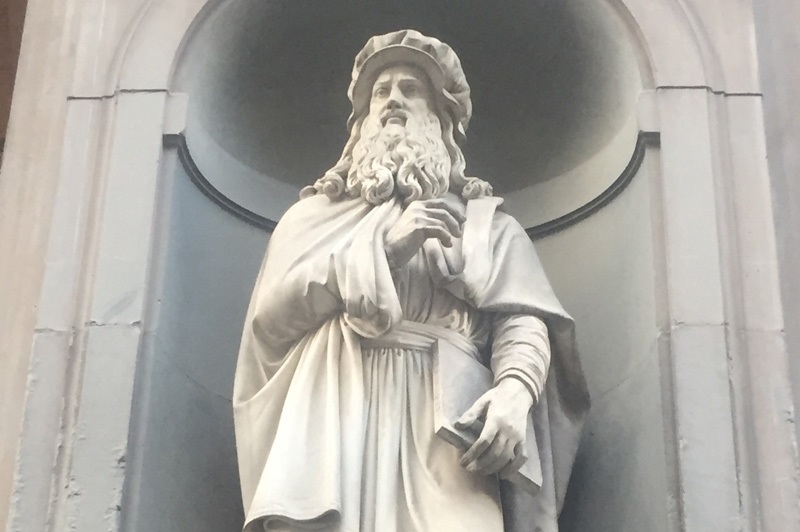 My whole life I have been fascinated by history. Through the biographies of historical figures, we can learn so much about life—through the lens and context of another time. I most recently read a biography on Leonardo Da Vinci. I’ve always been captivated by the life of this Renaissance man who seemed capable of doing and knowing anything. I learned some interesting things about his perspective on life that I found helpful, and maybe you will too!

Da Vinci means “from” or “of” Vinci, which is a small town in Tuscany near Florence. Leonardo could not use his family name because he was born out of wedlock. Because of this, he could not get a formal education and could not enter the profession of his father. Had he been born “properly,” Leonardo would have been forced or pressured into becoming a public notary.

That’s right. The man who gave humanity some of the most beautiful art treasures, who made discoveries about machines, hydro engineering, anatomy, flight, fossils, and so much more…could have been a notary.

Society called Leonardo a bastard and prevented him from a formal education and from entering into a lucrative, stable career that was his birthright. Many people would have spent their lives feeling sorry for themselves and being angry for these rules. Not Leonardo! He viewed them as liberating. Because he was not forced to take over his dad’s profession or go to school and be told what and how to think, he was able to pursue his own insatiable curiosity.

In addition to being “illegitimate,” he was left handed (a bad omen going back to Roman times), he was a vegetarian, and he was gay. Nearly everything about him made him different—which, in his perspective, freed him from the trap of societal expectations. Instead of spending his life verifying and testifying the authenticity of signatures and documents, he created new boundaries for what a painter could do and enhanced our understanding of the world we live in.

Some of his research was centuries ahead of its time. For example, in an effort to understand the circulatory system, Leonardo made a glass model of a bull’s heart by pouring wax around a real heart to make a mold. With a clear model, water, and grass seeds, he could watch the flow of fluids through the heart and hypothesize how the heart valves worked. His theory wasn't fully proven until the late 20th century. (More info here.)

So, What Can We Learn from Leonardo?

Leonardo was conscious of and happy for things that others may have considered ill fortune. Many people lament over “the times we live in” or not being born with opportunities. But instead of feeling self-pity, Leonardo saw his circumstances as a blessing. Instead of getting a formal education and having his head filled with what everyone “knew to be true,” Leonardo spent his life searching for truth. Observing and testing to see what worked and what did not.

The amazing and sad thing is that he never published most of what he learned. Many of his notes and notebooks sat in obscurity for centuries before being discovered. He sought knowledge and experience for the joy of learning. And in this pursuit, he lived on purpose—which gave him great satisfaction and gave humanity numerous gifts.

Leonardo Da Vinci is a reminder to live on purpose, to stay curious, active, alert, and aware. To never stop asking or searching.

It doesn’t matter if you live to be 20 or 80. Life is like a spark flying out of a campfire into the big night sky—up and out in an instant in the scale of eternity. Are you spending some portion of each day learning and growing? Being awed and inspired by this miracle of existence?

What You Can Do Right Now

Take out a piece of paper and make a list of all the things you want to do, have, be, and learn. Prioritize them with an A, B, C or D. Then prioritize all the A’s as A1, A2, A3, and so forth. Then look at your calendar and write down what you will do today for your A1 goals. Doing this each day will bring you a great sense of control and happiness, which can be difficult in this frantic world.

For related info, check out my post: Feeling Overwhelmed? Create a Road Map for Your Life.

Please let me know if you would like help with your action plan or figuring out how to budget, save, and work toward your dreams. Contact me online or email Carlo@IntegralWealth.net.

If you found this through social media and would like to have our blogs show up in your inbox biweekly, please send us a note and we’ll add you to our email list!